I've long had a love of Mouvèdre. In my house, growing up, Rhone wines were king. Just get my Dad started and he'll swoon over Vacqueyras or Gigondas, and of course he has a soft spot for Bandol, France's home of Mouvèdre. So, along with my fathers good looks, I inherited a love of these rich, complex, heady wines.

The wine that got me hooked on Mouvèdre though, was a varietal bottling from Spice Route of South Africa. Several years ago, while I was living in Cape Town, my parents came to visit over Christmas. We took them out to the winelands near Stellenbosch and Paarl, and stopped into the regions most widely known estate, Fairview - responsible for Goats do Roam, and a leading producer of not just wine, but goat cheese in South Africa. Fairview Winery owns several different labels, producing wines in diverse regions from Hermanus to Swartland. 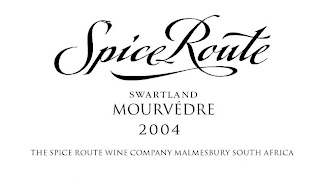 The Spice Route Mourvèdre hailed from the latter, and was the last wine we tried that day, after a line up of Pinotage, Cabernets and Chenin Blancs; it was the one that stood out, and the one we walked away with. What was appealing about it was its meaty, sweaty, dark and seductive core that jumped out and grabbed you. But it was packaged in a svelte and balance body. The taste resonated with the spicy borewors sauasage that is a mainstay of the South African braai. I know that Pinotage is the country's claim to the wine world, but Mourvèdre seemed to resonate more with the diverse, rich and spicy food and Mediterranean climate of Cape Town.

A few years after that, as I was searching for interesting Mourvèdre in the Vancouver, B.C. market, it was revealed to me that Spain also produced Mourvèdre. In fact, it was home to it, only there named Monastrell. I stored this information away, knowing if I couldn't find any Bandol, or re-live my Cape Town days, I could always look towards Spain. So when I recently had the idea for a Spanish themed tasting (here and here), I was eager to share at least one Monastrell with the group. 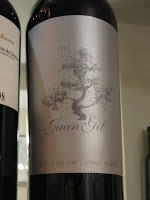 Gladly, I came across the Juan Gil 2007 Monastrell from Jumilla at a local shop, Vino, just in time to share it with the group. Jumilla is in the Murcia region of south-eastern Spain (for beautiful video and insight into the region, check the videos produced by Grape Radio), and this wine comes from 40 year old vines. That familiar rich, seductive array of aromas pulled me in to the glass, full of red and dark fruit, spice and meat. You can taste the Spanish sun, and rocky earth in the full body; This wine is definitely powerful, at 15% ABV, but carries its weight gracefully. This wine was a big hit with the group, as proved by the empty bottle test. And just as the Spice Route Mourvèdre would pair beautifully with Borewors or a Potjie, so to would this Monastrell pair with the grilled pork chops and grilled garlicy-mushrooms I had in Spain.
Posted by Unknown at 4:05 PM